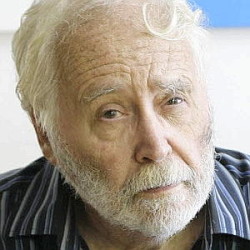 He has been also a theatrical set and costume designer, such as the 1976 production by the Santa Fe Opera of Virgil Thomson’s The Mother of Us All, based on the life of suffragist Susan B. Anthony. After the 11th of September attack, Indiana realized a Pace Paintings series which was exhibited in New York in 2004.

Indiana’s work often consists of bold, simple, iconic images, especially numbers and short words like EAT, HUG, and, his best known example, LOVE.
His best known image is the word “Love” in upper-case letters, arranged in a square with a tilted letter O. The red/green/blue image was then created for a Christmas card for the Museum of Modern Art in 1965.
It was also put on an eight-cent U.S. Postal Service postage stamp in 1973, the first of their regular series of “love stamps”.
There are different sculptural version of his “LOVE” image, placed all over the world: New York, Philadelphia, Las Vegas, Montreal, Madrid, Tokyo, Singapore.