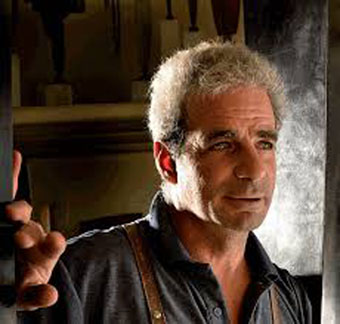 Dana was born in Alessandria, Egypt, in 1959. He graduated in sociology at the University of Lausanne and at the School of Fine Arts in Geneva. In 1979 he inaugurated his first atélier and, six years later, he devoted completely to sculpture. In 1982 he presented his first exhibition: 20 mechanical and sonorous works, together with some of his first iron works. While numerous personal exhibitions raised attention on Dana’s work, either in Switzerland and abroad, the artist evolved: he became more and more confident, mastering the use of space, thanks also to the monumental sculptures he realized for different public locations. In 1996 Dana went back to Egypt for a temporary stay, after which his artistic production returned to simpler, solemn shapes. Dana presented the “Stele” series and two years later he abandoned metals, to devote exclusively to stone. Dana’s works are exhibited in different solo and collective, in galleries, fairs, and international foundations, such as Fondazione Pomodoro, ART Basel, ART Miami, FIAC Paris, KIAF Séoul, and the Guggenheim of Bilbao. The artist currently lives and works in Lausanne.